What we are thinking and doing

In this post I want to outline some of the details of how we structured the workshops, the different sessions we ran and the content we decided to focus on. We also created and used a number of openly licensed resources, which have all been made available online for anyone else to build upon and adapt for their own use. You can read more on the project goals and design in the first post here.

We decided to focus on the strand Planet Earth and Beyond in the first workshop, using it as the example during the skills sessions, and then also looking at the content in this strand first. We did this for several reasons:

After that, and into the second workshop, we focused on the key content areas in each of the remaining 3 knowledge strands, linking back to and building on the skills from the start of the training.

Unfortunately, due to logistical and planning complications, we could not run the first workshop in Cape Town for the Western Cape, Northern Cape and Eastern Cape subject advisors. We subsequently created a modified, condensed programme to run in Cape Town over 6 days. The programme below is the general one designed to run over the two workshops. I have provided some descriptions of the sessions that we ran, but not all of the details or practical activities (in groups or as individuals) are included here. 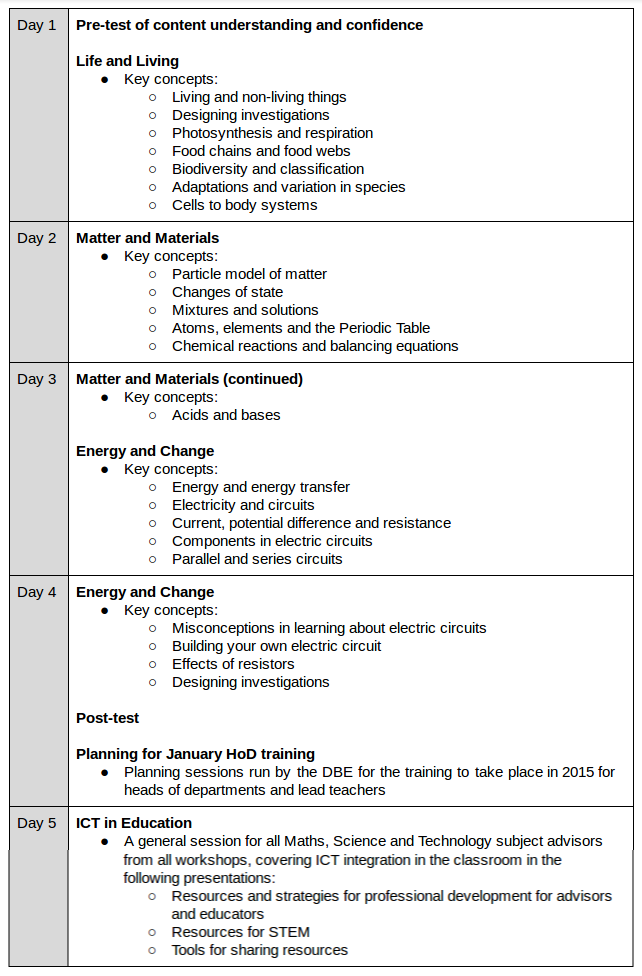 Resources used and created for the training

Resources used and created for the training

The training workshops required a number of resources, most of which had to be created specifically for the training. All of these resources have subsequently been made openly available under a Creative Commons By Attribution License.

The Gr 4-9 workbooks created by Siyavula in partnership with SaIF and DBE were used as the primary resource for these workshops. All practical activities were taken directly form the workbooks so that advisors could become familiar with them and see how to practically implement the content.

The DBE printed a subset of the Gr 7-9 workbooks for all the advisors, however, not the Gr 4-6. As we were also covering content and activities from Gr 4-6, and had advisors responsible for the Intermediate Phase, we felt it important to have hard copies of the workbooks present. Siyavula therefore printed and distributed the Gr 4-6 workbooks for the advisors, outside of the DBE.

We also used and made reference to the workbook content online on the respective websites for each phase, namely:

Most of the subject advisors were not aware that there were supporting websites where they could access all of the content and also download the PDFs of the learner workbooks and Teacher’s Guides in English and Afrikaans, as well as other resources such as concept maps and posters.

We also made use of the Siyavula Flickr photostream online where I have made all the photographs, images and illustrations created for the workbooks are available in high resolutions for download. This is especially useful to advisors and teachers who want to make their own worksheets, notes and tests based on the workbooks, and therefore using images from the content.

Prior to the start of the training, I wrote a 50 page “Training Manual” which we printed and distributed to each advisor at the start of the workshops. The aim of the Training Manual was to provide advisors with supporting material for the topics and content we were going to cover. We realised that several of the sessions we would be running would contain a lot of new ideas and approaches and there was also a lot to cover and take in, in a short amount of time. I felt that if advisors had something to take away with them to read and reflect on later, the training would have a greater impact.

The main topics covered in the Training Manual are:

The Training Manual was not intended to be a manual for advisors to conduct their own subsequent training, but rather as a support and reference for the current training. The DBE, led by Siyalo Qanya, head of Natural Sciences, developed an additional training manual during the workshops for the subject advisor training of the Heads of Departments and lead teachers to take place in 2015. This was done during the second set of workshops and the DBE used the structure, core content, materials and presentations from our current training to develop the subsequent training programme and manual. This was so that there was no disconnect between what was done with advisors in 2014 and what they would be doing with their own training in 2015.

During the production of the Gr 4-9 workbooks, I created a concept map for each strand to show the progression through the grades. These were used in the design and authoring of the content. You can read more about the work I have done in concept mapping in this post. Subsequently, these concept maps have proved to be very popular, especially among teachers. I therefore decided to use them again in the training, which will be discussed in the next post. We printed out several copies to stick on the walls during the training and also used them for several activities on conceptual progression. 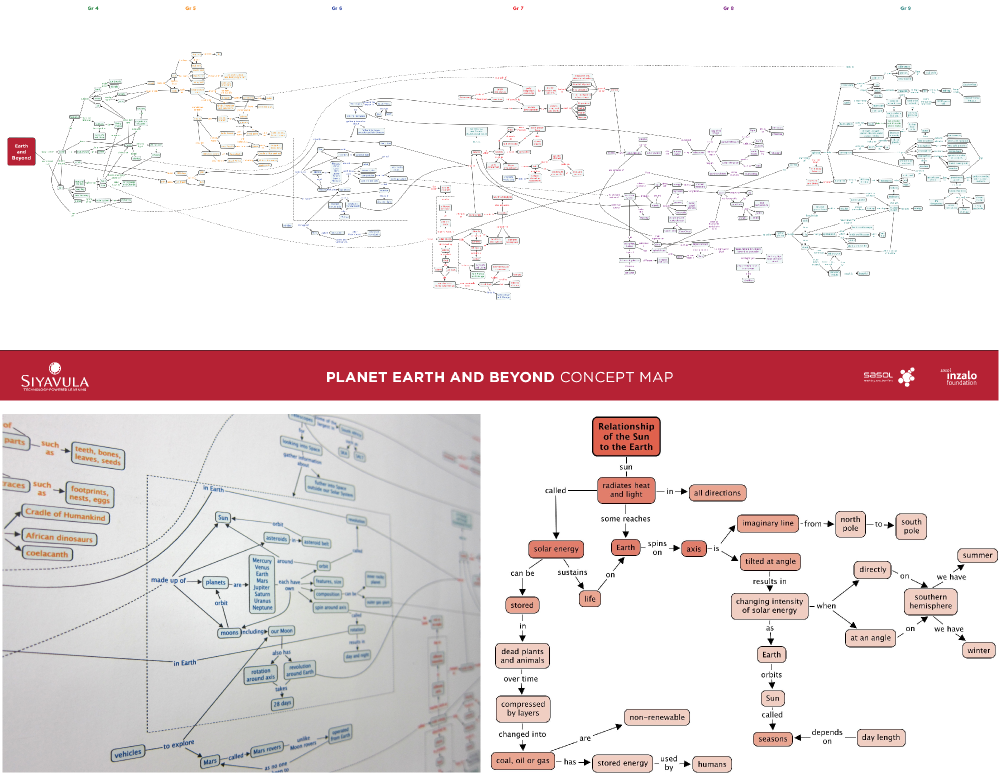 We created several worksheets for various activities throughout the training. Some of these worksheets were designed specifically for the training and some were photocopies taken from pages in the workbooks as advisors did not receive a full compliment of all the workbooks, nor did they receive them at the start of the training, so we could not rely on having the physical copies to work out of.

We carefully selected the videos and animations used at various stages throughout the training, either to demonstrate certain skills, topics, practical tasks, or explain a difficult concept. For example, during the session on integrating practical work into the Natural Sciences classroom through enquiry-based learning, we used a video of a rocket launching as a stimulus for the investigation we then designed to model the thrust of a rocket using a balloon on a straw on fishing line, as shown below.

We showed advisors how to access these videos from the online workbook websites and also which websites and channels we use at Siyavula as trusted sources of quality video material.This was one way to show how to meaningfully integrate the use of technology into the classroom. We also downloaded all of these videos so that advisors could get offline copies.

The Pre and Post test on content knowledge was created specifically for these training workshops, which will be discussed in detail in the next post. Subsequent to the training workshops, I have also written a full set of solutions to the multiple choice questions including explanations of each answer, which has been made available. It is my hope that all subject advisors, and any other interested parties, will go through these explanations, reflect on their answers and use this to focus on their own development and understanding of the difficult concepts in Natural Sciences.

We purchased 10 electric circuit boards which includes all the equipment necessary to perform experiments and demonstrations in the electricity sections. These boards were used in groups for a number of tasks within the Energy and Change sessions. Although one can perform basic electric circuit experiments without the boards, simply using batteries, torch bulbs and wire, the circuit boards make the work much more efficient and easier to diagnose connection problems. This is especially important when working within the time constraints of a workshop, and they proved to be a real hit!

Digital copies of all of these resources have been made available to the subject advisors, and others who may want to make use of them, at the following link for download:

This link was sent out to all the subject advisors via email, even those who were not able to attend the training, so that they can all make use of them personally, to distribute to their teachers and for use in their own training. We also copied all of the resources onto flash drives and CDs for the subject advisors during the workshops as many would have difficulty downloading large amounts of content once back at home. Internet connectivity, especially within schools in South Africa, is still challenging for many people, and I have discussed this a bit more in a previous post in terms of the implications for distributing open educational resources (OER) in the developing world.

Overall, I think we collectively created a wealth of resources before, during and after the workshops that I hope will be of use to advisors and teachers in the future as they modify and build upon them to suit their needs.